Our guide on the best places to visit in Singapore

Singapore is an island of contrasts. The downtown core may have a sci-fi cityscape of gleaming skyscrapers and glistening, sparkling-clean streets, but tucked away amongst the towers you’ll find enticing green spaces, atmospheric multi-ethnic religious centres, and historic shophouses.

A major centre of regional migration over the last two hundred years, Singapore is a melting pot of cultures, resulting in a diverse food scene and an intriguing array of ethnic enclaves. The downtown area has a thriving Chinatown, Little India, and Arab Quarter, with further cultural influences from the British, Straits Chinese, and regional communities such as Bugis, Malay, and Tamil clearly evident throughout various colourful neighbourhoods. A happy few days can be spent wandering the city centre streets, revelling in the varying flavours and atmospheres found around each corner.

Thanks to a highly efficient public transport system visitors can be transported just about anywhere in minutes. Singapore’s subway system (MRT, or Mass Rapid Transit) is cheap, quick, spotlessly clean, and a doddle to use. Buses are equally efficient and taxis can be found anywhere and anytime.

For a completely different side to the city, you’ll find Sentosa lying just off Singapore’s southern coast. A former British military fortress, it’s now a popular recreational island known for its theme parks, golf courses, award-winning spas, resort hotels and excellent beaches. History buffs will enjoy Fort Siloso, where the British made a stand against the Japanese in 1942, complete with tunnels and cannons. Nature lovers will appreciate Sentosa Natura Discovery which includes a showcase of wildlife and heritage trees native to Singapore and the entire region.

Best places to go in Singapore

We’ve put together a guide to Singapore’s neighbourhoods and districts. Please speak to our specialists if you’d like more information on any of these locations. 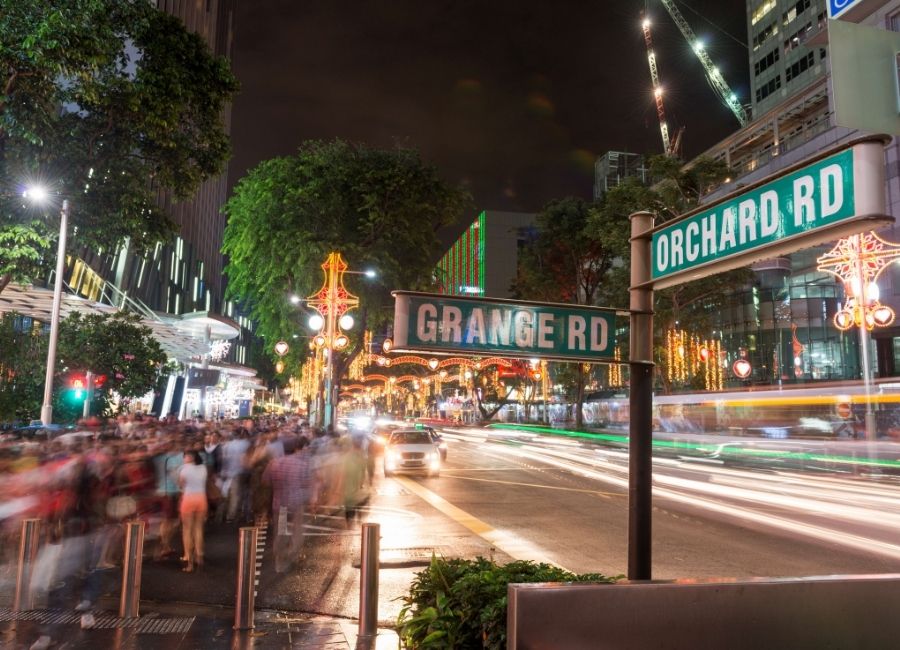 The heart of Singapore’s high-end shopping scene, Orchard Road is 2.5km of malls, department stores, cafes and eateries. It’s a busy place day and night but especially so on weekend’s, when the shopping-mad city descends to flash the cash or just hang out. ‘Orchard’ refers to the road itself and surrounding district, which runs from Scotts Road all the way down to Dhoby Ghaut at the mouth of the historic downtown core. 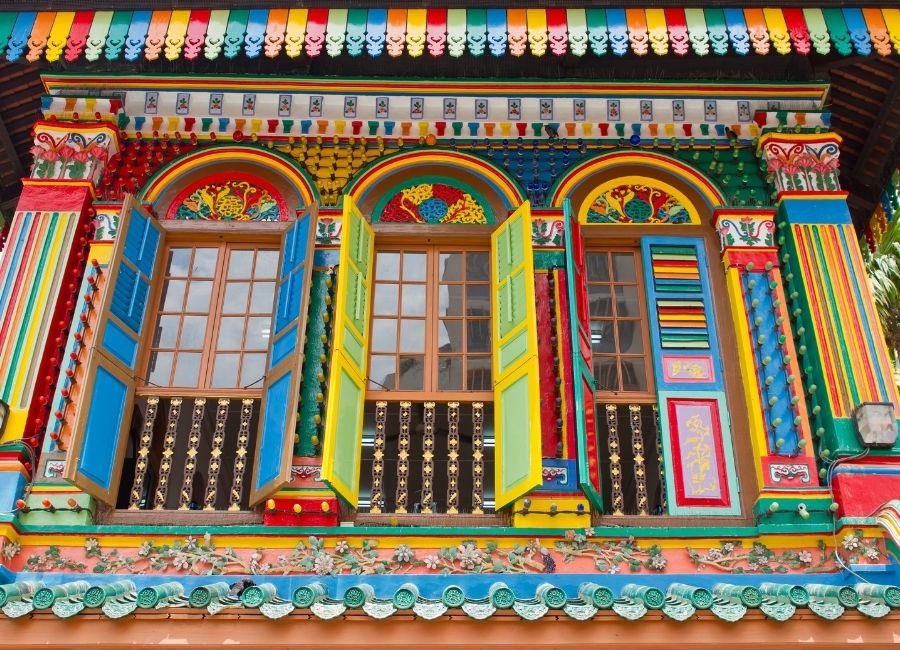 Bugis, in the heart of downtown Singapore and once right on the island’s waterfront, offers a glimpse of historic Singapore with its’ low-rise buildings and traditional shophouses. It’s a microcosm of diverse Singapore with no dominant cultural community, but plenty of great hotels, restaurants, and shops, and highly convenient location in between Chinatown, Kampong Glam, Orchard, and the Quays. The name ‘Bugis’ relates to a Sulawesi ethnic group, known for the shipbuilding prowess, who made villages in this area way back in the early 1800s. 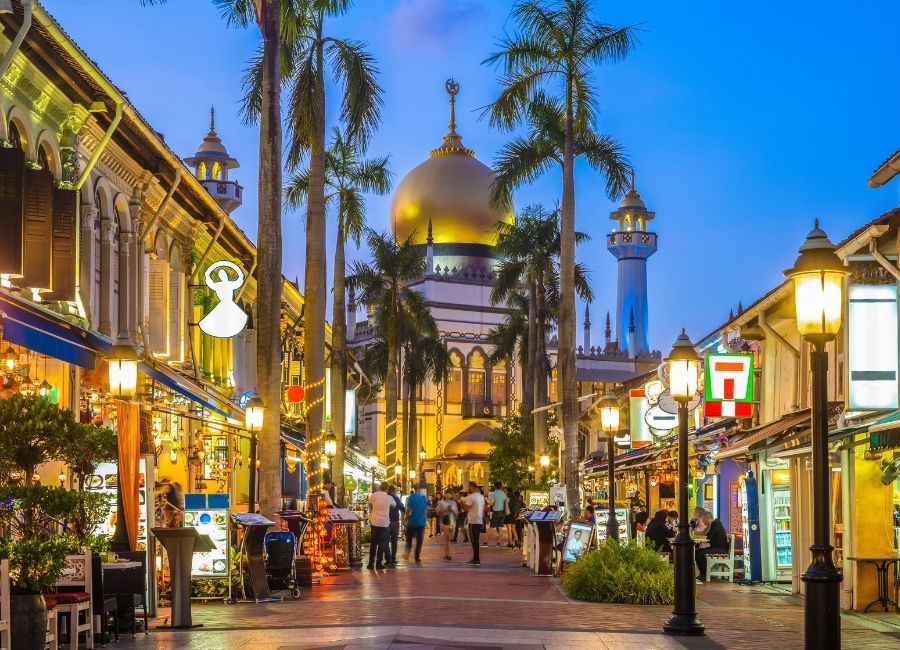 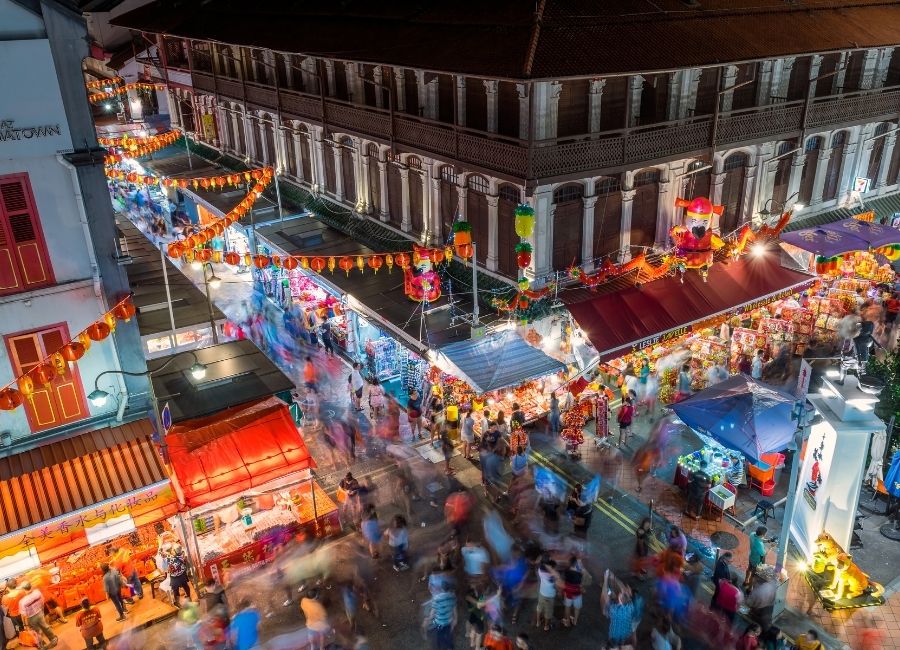 Designated by Stamford Raffles as a district specifically for Singapore’s migrant Chinese population, the Chinatown area is now an exciting mix of old and new, with medicinal centres and tea traders sharing space with upmarket offices and galleries. Chinatown Food Street is among the island’s best food destinations – check out the Char Kway Teow or oyster omelette! Confusingly, it’s within Chinatown where you’ll find the colourful Sri Mariamman Temple, built by Singapore’s Hindu Tamil population. 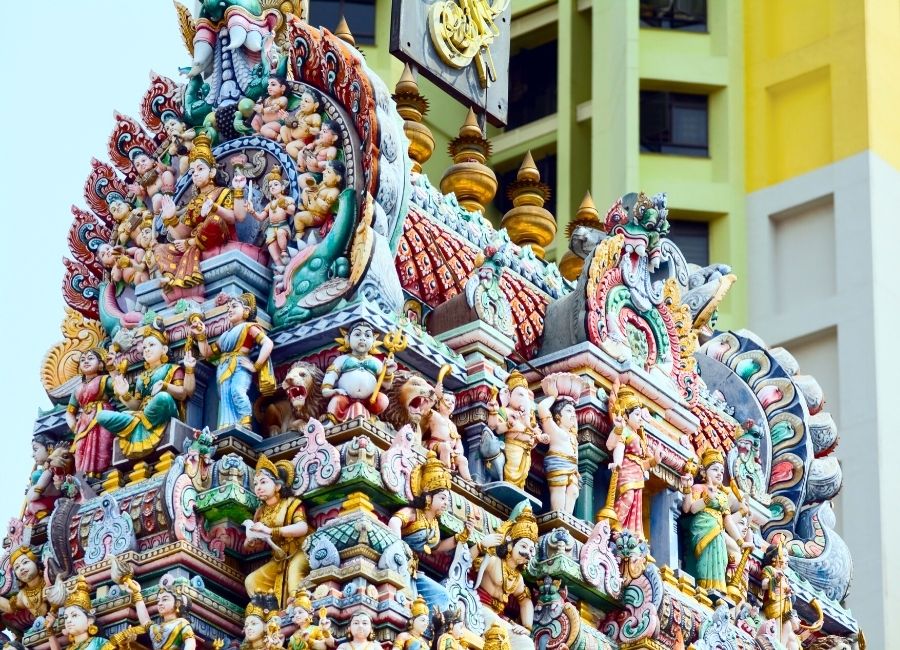 As you’d expect, Little India is colourful, vibrantly commercial, and a little bit chaotic. Situated to the west of Kampong Glam and north of Bugis, it’s a centre for jewellery, fabrics, and Indian snacks and sweets. You’ll also find colourful Hindu and Buddhist temples, banana leaf meals, and fortune-telling parakeets. Typically for Singapore there’s a notable mix of both Indian and Chinese communities living and trading within the historic neighourhood. 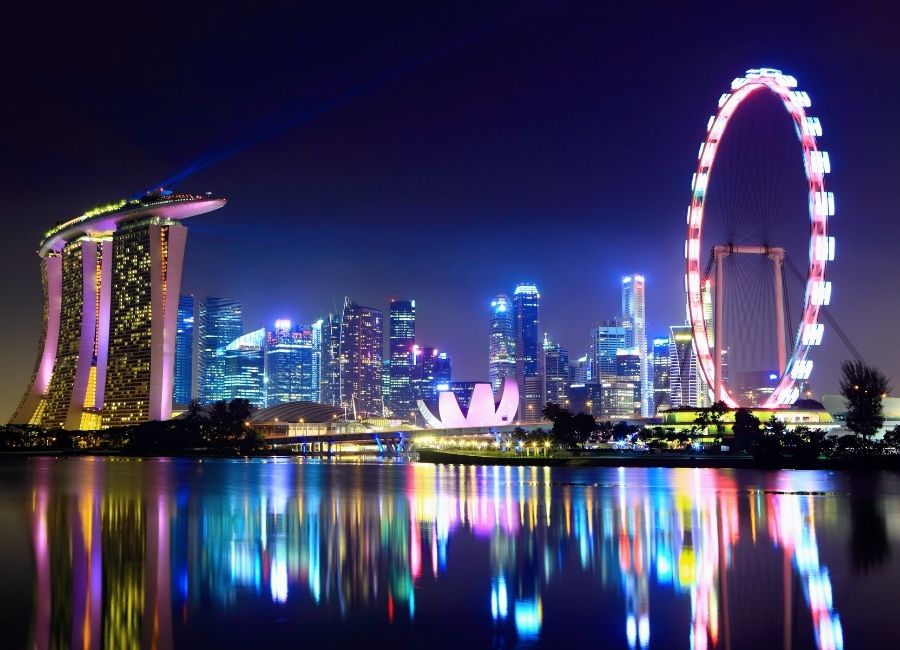 Moving out of the historic neighbourhoods, Marina Bay is the face of glitzy, modern, Singapore. Sitting on reclaimed land which was open sea just a generation ago, the are now houses a dizzying area of skyscrapers and luxury malls. Two of Singapore’s most iconic sights – the ‘supertrees’ of the Gardens by the Bay, and the instantly-recognisable three-towered Marina Bay Sands Hotel – are located here, along with much of Singapore’s financial district. 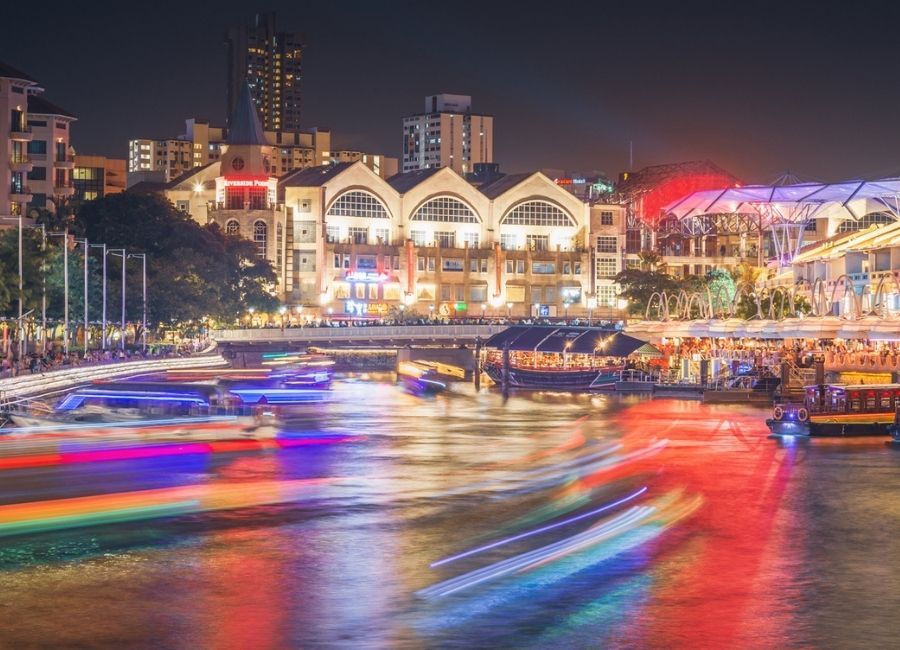 Moving up the Singapore River from Marina Bay, you’ll come across historic Clarke Quay and Boat Quay. Once the epicentre of Singapore’s trading and commerce, the two Quay’s have now long lost working status – superceded by super ports in Jurong and Pasir Panjang – but have transformed themselves into nightlife hubs, housing upmarket restaurants, bars, and nightclubs. Both have a full range of international dining options which evolve into rowdy drinking dens as the night progresses. 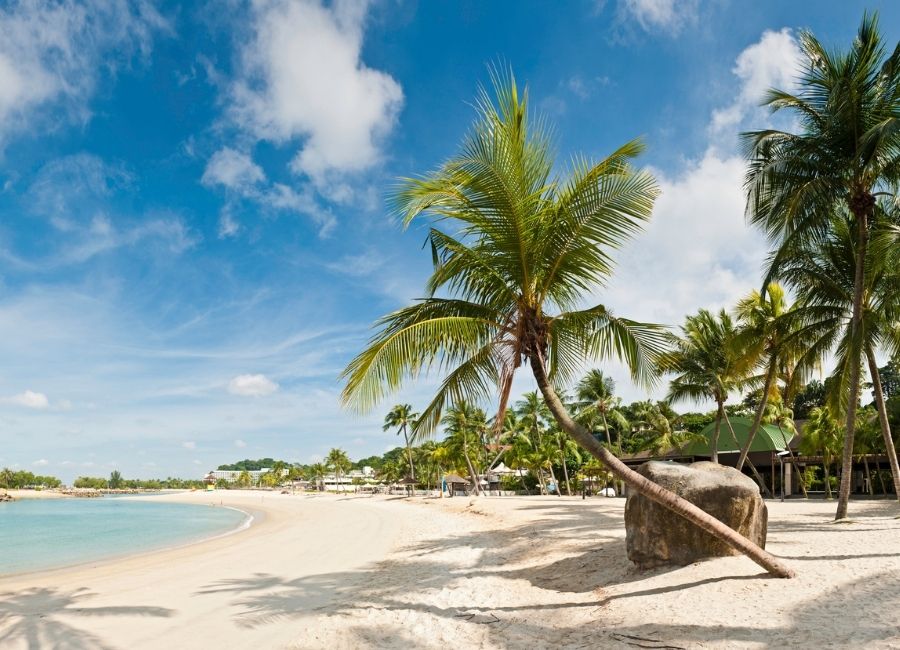 With a wealth of things to see and do, some say a visit to Sentosa is like a rollercoaster ride without any stops, experiencing one high after another on an enchanting island just minutes from the mainland, accessed by bridge. Enjoy everything from lounging on picture-perfect beaches to witnessing the Wings of Time laser show and experiencing thrilling adventure parks. 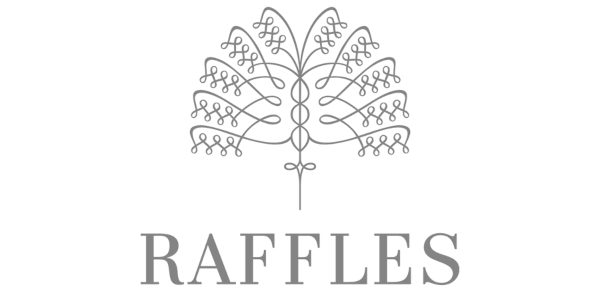 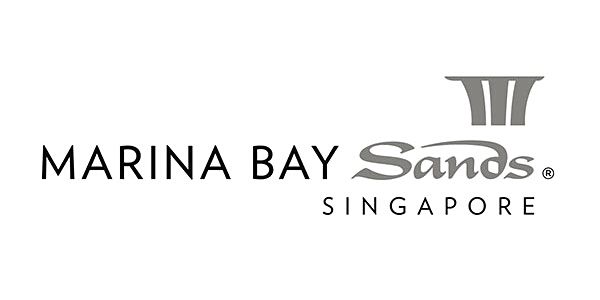 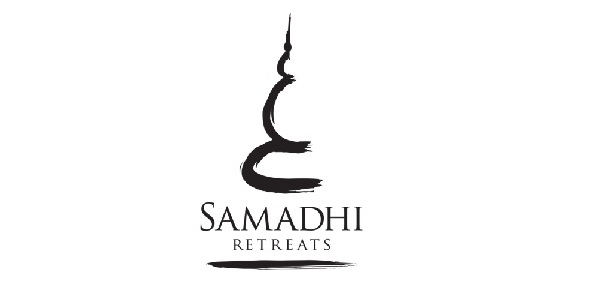 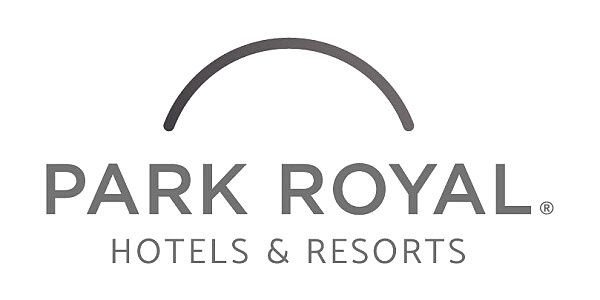 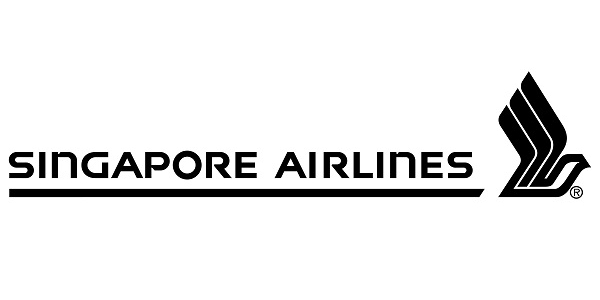