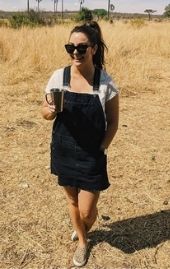 With a Kenyan father, Indian grandparents, and a Portuguese surname, travel is in my blood. I am enthralled by East Africa and would happily talk about Africa’s wildlife, cultures and experiences all day, every day.

This 10-night flying safari is designed to maximize your chances of seeing the Great Migration as the herds of zebra and wildebeest journey through the Serengeti Ecosystem. Close behind the herds of animals are the big cats (leopards, lions and cheetahs) following their prey. Depending on the time of year you will encounter a range of wildlife experiences, from the birth of the young to the infamous river crossings. You will be staying at a luxury camp that has three possible locations in the Serengeti, the whole camp will move depending on where the Migration is.  We have also added two nights at the Ngorongoro Crater to create a once in a lifetime safari experience. 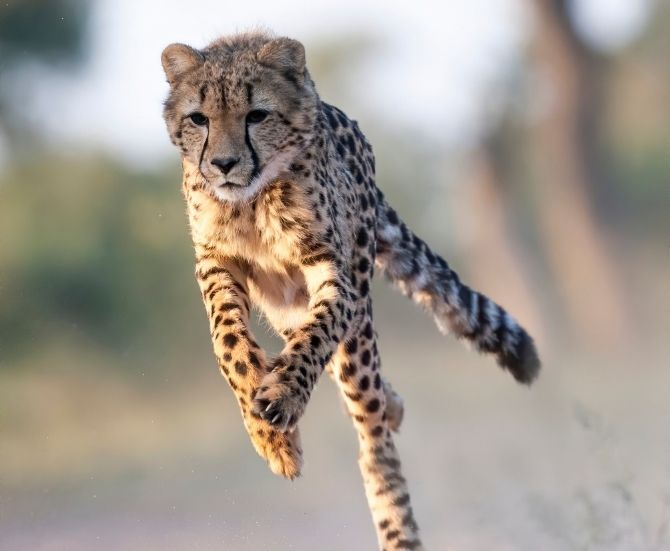 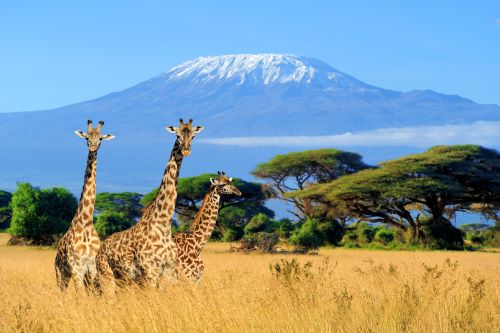 Today you will arrive at Arusha, Tanzania. You will be met by your driver and transferred to your hotel. Katambuga House is a small, intimate guesthouse set in lush gardens just outside Arusha. You will have the rest of the day to relax after your flight. 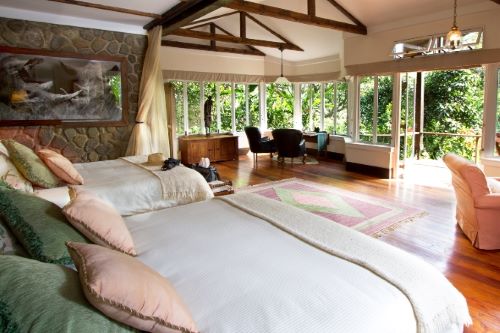 This afternoon you can explore the extensive gardens, book a trip to visit Lake Manyara or visit a local village to learn more about the Hadzabe Tribe. 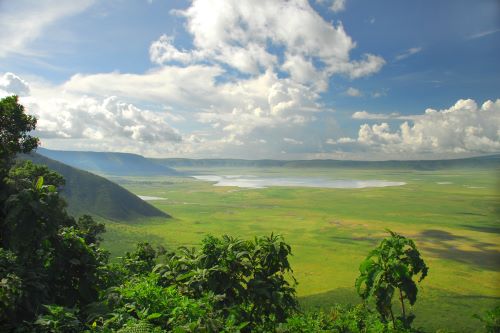 The Ngorongoro Crater is one of the Wonders of the World, and rightly so! As the largest inactive caldera in the world, the Ngorongoro Crater attracts thousands of visitors each year to witness the views from the top, and experience the famous game drive down the crater rim.

This morning you will meet your guide and head out early in the morning on safari. You will be in a closed vehicle with a pop up roof, allowing for great visibility. You will spend the day in the famous Ngorongoro Crater with a picnic lunch.

Enjoy the unique ecosystem and the abundance of wildlife on your day-long game drive. 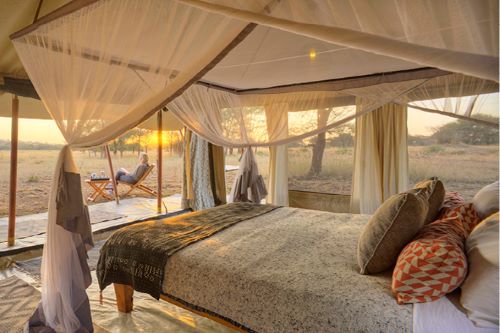 This morning you will check out of Gibbs Farm and board a light aircraft for your transfer into the Serengeti. You will be staying at the Ubuntu Migration Camp. The camp moves across the reserve, following the herds as the animals move in search of food. The location of the camp varies through out the year to give guests the best chance of witnessing the migration. The migration is not a exact science as it is controlled by the rain patterns.

December – March: Ubuntu camp is in the south of the reserve. The area is known for its lush grass and is where the herds rest and where the wildebeest often give birth.

May – July: Ubuntu Camp is in the Western Corridor of the Serengeti near the Grumeti area. Watch the herds try and cross the Grumeti River and the predators who follow them.

August – November:  Ubuntu Camp is based in the north of the Serengeti near the Mara River. Here is where the animals cross the river, and it leads to some spectacular game viewing. 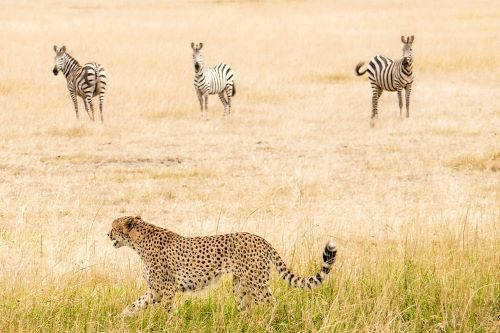 Ubuntu Camp is a seasonal camp of 8 tents. Each tent has an ensuite bathroom tent with a safari shower at the rear. To the front is a small veranda and seating area that allows guests to enjoy the peace of the bush in their own space. The communal areas of the camp are set around an open fire and comprise of a dining area and a sitting area from which guests can enjoy the space this wilderness offers.

Each day you will have a morning and afternoon game drive out into the reserve to explore the area and follow the wildlife. 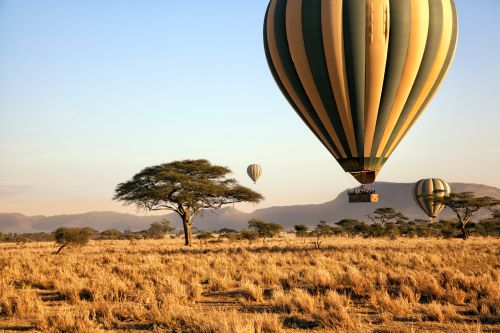 Today you have the option to book a hot air balloon trip over the Serengeti. This excursion starts early so you can watch the sun rise from the balloon. From the sky you can appreciate the vastness of the reserve and the many different habitats in the Serengeti. The park is 14,750 kmsq and is part of the wider ecosystem that comprised of the Masai Mara and the Ngorongoro Conservation Area. 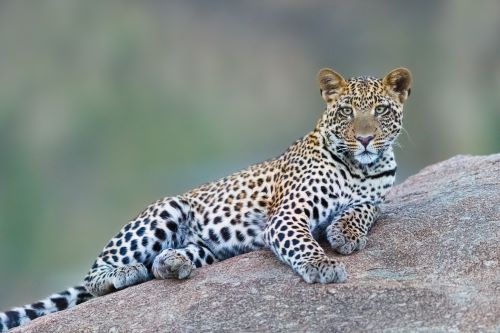 The migration refers to the movement of over 1.5 million wildebeest, 200,000 zebras and 350,000 gazelles each year through the Masai Mara/Serengeti Eco System. As the herds move, the predators who rely on them for food, follow them. Your expert guides will take you out into the reserve in search of this incredible natural spectacle. 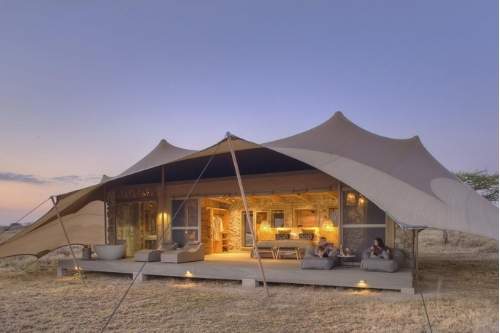 Today you will transfer to another part of the Serengeti National Park to stay in Namiri Plains Camp for 3 nights on an all-inclusive basis. This luxury camp is located in the eastern Serengeti and has a thriving cat population – in particular, lion prides and cheetahs. 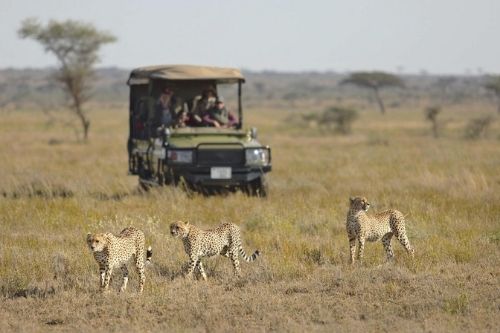 Namiri Plains is located in the eastern Serengeti. This area is very remote, and was closed for around 20 years to the public. This was in an effort to let the cheetah populations restore and thrive. It was a very successful project, as today, the area around Namiri Plains has some of the densest big cat populations in Tanzania. The best thing about this area is that there are only a handful of camps that area situated here – so you will feel like the safari is completely private.

Namiri Plains is a luxury camp with huge canvassed rooms, a swimming pool, lounge and dining areas and excellent service. The guiding here is second-to-none. This area has fantastic resident wildlife – with many lion prides, cheetahs, elephant, buffalo and, during the months of October to December, you can see the herds passing through this area. 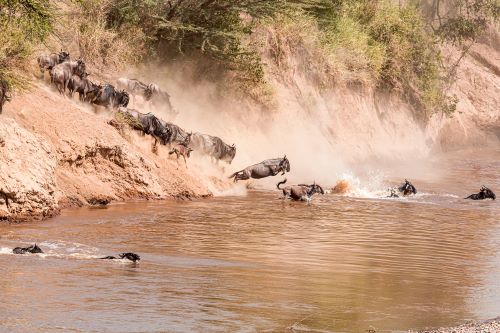 This morning you will enjoy your game drive followed by breakfast before you are transferred to the airstrip. You will then board a light aircraft for your flight to Kilimanjaro Airport where you will connect onto your international flight home. If your flight home is late in the evening, we can arrange a day room at a comfortable hotel for you in Arusha.