Turkey: The Crossroads of Civilization

Turkey: The Crossroads of Civilization

Turkey is a country that should be on every traveler’s bucket-list with its impressive mix of cultures as a place where East meets West. The ancient landmarks are fascinating, and the landscapes are incredibly diverse. with everything from beautiful white sandy beaches and hot springs to remarkable rock formations and spectacular mountain ranges. In this article, we give you a summary of key destinations and experiences to enjoy.

The rich history of the Turks dates back over 4,000 years, but it was in the early 11th-century that that they conquered the land known as the Anatolian Seljuk State. It was the first Turkish State in the region, but it rapidly declined with the Mongol invasion in 1243. The Ottoman Empire came into control in 1299, rapidly expanding throughout the 14th-century, with Ottoman Beylik ruling over a vast territory stretching over three continents. It endured for 623 years, through World War I. The Empire was defeated by the invasion of Russian, France, and Britain, marking the end of its long rule here.

Sitting at a crossroads between East and West, Turkey draws elements of both which results in a unique cultural blend. The territory had had a striking array of cultural influences that have left their marks, and an archaeological legacy that can bee seen in the landscape, from Classic European civilizations to the Islamic Meddle East. Many locations of cultural significance are UNESCO-LISTED, including areas around capital Istanbul, which Asia and Europe divided at the Bosporus Strait. In the northeast, the border combines Georgian and Turkish culture, while the southeast reflects Arabic and Kurdish, and the west has many influences from European traditions.

The world’s only city that straddles two continents, the Turkish capital is a place where East meets West, with one side of the Bosporus Strait in Asia and the other in Europe. Its culture reflects that divide, providing an enchanting mix of grand palaces and majestic mosques, an ancient market overflowing with colorful spices and a diverse array of incredible cuisine. Istanbul possesses a rich and complicated heritage as the former capital of the Ottoman and Byzantine empires, leaving behind many iconic landmarks and a unique blend of architecture. Walking down the street you might see a modern glass skyscraper next to a Byzantine church or a bazaar backed by a bustling shopping mall. The narrow strait that cuts the city in two connects to the Black Sea in the north and the Sea of Marmara in the south – from the water, you’ll see a skyline of soaring towers, steeples, and domes.

Visit the Spice Bazaar and Suleymaniye Mosque Istanbul offers many attractions, but two of the most iconic are the Spice Bazaar and Suleymaniye Mosque, the city’s most important mosque, considered one of the greatest masterpieces created by imperial architect Mimar Sinan. The Grand Bazaar is no tourist trap, it’s a place where many locals come to shop on a daily basis. Turkish residents tend to be much better at bargaining, so you’ll want to get your game on before exploring the world’s largest covered bazaar with some 60 streets that are lined with dozens of restaurants, thousands of shops, and 12 mosques. Taking it all in, the sights, sounds, the tastes of the local cuisine, haggling for those famous intricately patterned carpets, leather, hand-painted ceramics, Byzantine jewelry, and more, is all part of the experience. The mosque, constructed in the 16th-century, crowns one of the city’s seven hills, dominating the Golden Horn, stunningly beautiful inside and out

The Cappadocia region is a fairytale-like place in the Anatolian plains. A bizarrely beautiful landscape, it’s almost otherworldly, with hundreds of astonishing rock formations rising from the ground. Interspersed among the limestone pillars and spires are churches and cave dwellings carved right out of the rock – some are even available for rent as cave hotels and homes.

The town of Göreme houses some of the most incredible structures in a complex of fresco-filled churches and monasteries called the Göreme Open Air Museum. This area is also famous as a destination for hot-air ballooning, with rides especially popular at sunrise, bringing a bird’s-eye view of the remarkable landscape under the early morning light. Simply watching from the ground is a breathtaking experience as dozens of colorful balloons fill the sky. Horseback riding and hiking are also popular and history enthusiasts will find plenty to love too, but it’s the stunning panoramas that are most memorable.

Take Off in a Hot-Air Balloon Over Cappadocia Known as the “land of beautiful horses,” Cappadocia is renowned for its wild mountain ponies and alien-like landscapes with unique rock formations that look unlike anything you’ve probably ever seen. While the views at ground level are truly breathtaking, the magnificent natural grandeur of the area is best taken in from above, which is why this has become one of the world’s most popular places for a hot-air balloon. You’ll be able to gaze down at the ethereal “fairy chimneys,” with remarkable pillars and limestone spires as well as dwellings and other structures carved into the rock. This may be the only place on the planet where hundreds of balloons soar up into the sky some 250 days of the year. While April through November are the best time to enjoy this experience of a lifetime, provided the winds aren’t too strong, winter can be especially magical too.

Located on a wide bay beneath a range of high hills on the Aegean coast, Izmir was once the ancient city of Smyrna, with a long, rich history although it’s now modern and developed. Turkey’s third largest city and second biggest port is full of life, home to tens of thousands of university students and offers plenty to do after dark and during the day. The Kordon is a seaside promenade lined with enticing cafes, while Konak Pier now serves as a chic shopping center. The spiritual heart of the city is Konak Square with its 1901 clock tower, the site where modern Turkey’s fight for independence began in the wake of the First World War. From Kadifekale, the Velvet Castle, one can enjoy a jaw-dropping panoramic view over it all. Nearby, the ruins of Ephesus include terraced houses with ancient intact frescoes and a large Hellenistic theater.

Visit Ancient Ephesus – Ephesus was a major trade center in the ancient world, with its history dating all the way back to the 10th-century BC. In 2015, it was named a UNESCO World Heritage Site for its “exceptional testimony to Hellenistic, Roman Imperial, and early Christian periods.” The cultural traditions from those eras can be seen among the impressive ruins of Hadrian’s Gate, the Temple of Hadrian, and Celsus Library, built in 117 AD to store some 12,000 scrolls as one of the largest at the time. There are statues, aqueducts, and remarkable terrace homes. The homes contain gorgeous frescoes and mosaics, where you’ll be able to see the painstaking work it took for archaeologists to put the broken tiles back together. One could easily wander for hours, walking around the excavated and reconstructed structures that make it easy to imagine how people lived their lives during these ancient times.

Lying along the southern Aegean coast, Bodrum may be a modern resort town, but it’s home to the ruins of the Mausoleum of Halicarnassus, one of the Seven Wonders of the Ancient World. Toppled by a series of earthquakes between the early 12th and early 15th centuries, the polished stone and marble from the massive monument were reused to build a castle on a site that’s been fortified for over 3,000 years, sitting on a promontory Bodrum east of the harbor. Nearby is the 4th – century B.C. Greek-style amphitheater that’s still used today for cultural events. Many visitors come to enjoy the beaches in the summer with a public stretch right in town and many others that are particularly outstanding like Bitetz, a Blue Flag beach with shallow, warm, and clear blue water. Bodrum is also one of the top spots for summer nightlife, attracting Turkish celebrities and famous DJs for dancing until dawn.

The best way to see all of Turkey's highlights?
Explore our suggested itinerary for Classic Turkey >> 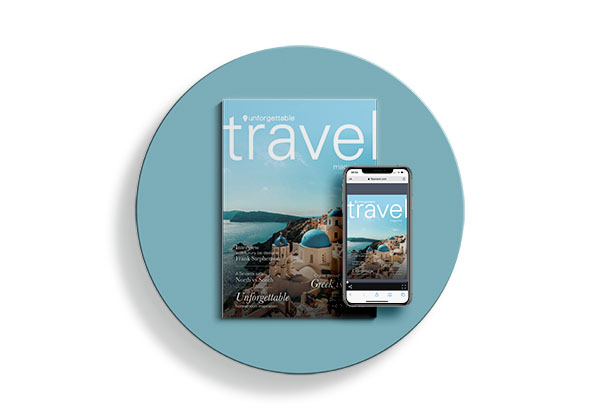 This article was first published in issue three of the Unforgettable Travel Magazine.

Why book with Unforgettable Travel