The Galapagos is a one-of-a-kind destination, a microcosm of evolution situated 600 miles off the Ecuador mainland. As the islands were never connected, animals had to float, fly or swim to get there. Larger mammals were unable to make the journey which meant a lack of predators, allowing the inhabitants to thrive. Many never learned to fear humans and still appear almost tame, providing opportunities for rare close encounters with everything from blue-footed boobies and penguins to sea lions and giant tortoises.

Cruising is arguably the best way to explore this eastern Pacific archipelago. Galapagos National Park regulates the type of number of vessels that can bring tourists to the area to avoid overcrowding and lessen the environmental impact, while also minimizing stress on the wildlife. Most offer 5- or 7-day all-inclusive itineraries that are monitored strictly by park officials. Most live-aboard cruise ships carry a limited number of passengers, usually fewer than 20. While they can’t provide the luxury amenities those massive cruisers can, the service is much more personalized and you’re more likely to get in-depth, expert insight about what you’re seeing from the crew and experts on board. 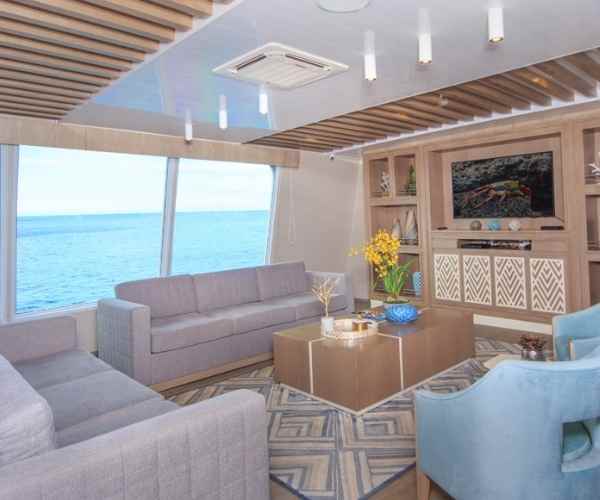 Top islands to visit on a cruise

The Galapagos archipelago is made up of 18 islands, 13 of which can be visited. They cover a vast area, approximately 17,375 miles. While each island offers unique reasons of its own for a visit, these are some of the most popular for wildlife viewing.

Santa Cruz. The most populated island in the Galapagos with a population of approximately 15,000, most of whom live in the main town of Puerto Ayora. The Charles Darwin Research Station can be found here along with a tortoise breeding center. There are magnificent reserves where Galapagos giant tortoises roam and unspoiled beaches with marine iguanas, lava lizards, sea lions, and blue-footed boobies.

Española. This island is the place to go if you want to witness the famous blue-footed booby mating dance. There’s also a large colony of Nazca boobies and Española marine iguanas, the only type that’s red and green, often referred to as the “Christmas iguana.”

North Seymour. Tiny North Seymour Island is less than a square mile inside, but it’s another one of the top islands for spotting the blue-footed booby. You’re also likely to see male frigate birds showing off their bright red throats that puff up like a balloon. 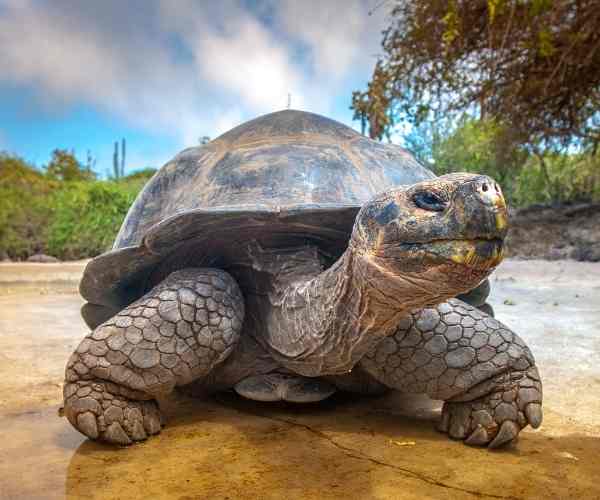 South Plaza. Lying off the east coast of Santa Cruz, South Plaza boasts impressive vegetation that creates landscapes with a kaleidoscope of color, including the vibrant purple and red Sesuvium that mixes with prickly pear cacti. There are also many nesting seabirds and unique hybrid iguanas.

Genovesa. Known as “Bird Island” due to its many nesting bird species, Genovesa is particularly known for its red-footed boobies but it’s also home to Galapagos fur seals.

San Cristobal. The lushest of the islands, San Cristobal is home to one of the archipelago’s top dive sites, Kicker Rock. The coast includes coral beach, mangroves, and cactus while the green highlands are home to a freshwater lake. A wide range of bird species, Galapagos sea lions and Galapagos giant tortoises can be found here too.

Bartolome. One of the most photogenic islands, Bartolome is known for its volcanic landscapes as well as being ideal for spotting everything from sea lions to penguins. 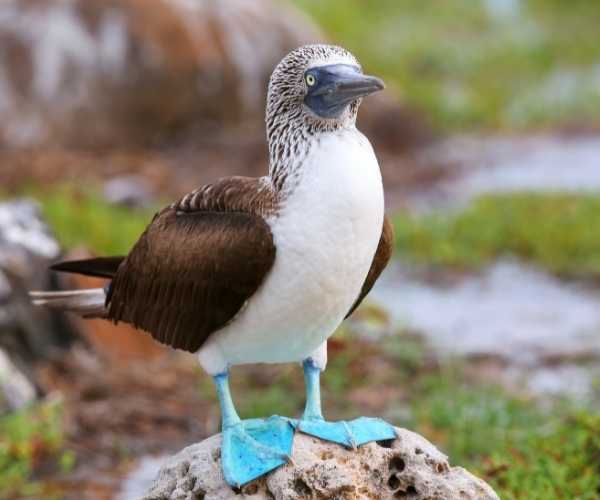 There are approximately 2,000 species that are endemic to the Galapagos, making it one of the hottest spots for wildlife enthusiasts in the world. In this remote corner of the globe, you’ll get a glimpse of what it might have been like before humans arrived while enjoying the chance to witness the “Big 15.”

Blue-Footed Booby. Clumsy on land while agile in the air, blue-footed boobies are one of the most popular Galapagos species. Their most distinctive characteristic is their large, blue feet, the brighter the better for males as females consider the brightest feet to be an indicator of high-quality genes. In mating rituals, the males show off their feet with a famous high-stepping dance to attract prospective mates.

Red-Footed Booby. The red-footed booby captures attention with its vibrant red feet. It’s the smallest of the three booby species in the Galapagos and only comes ashore to breed, preferring to spend its time at sea.

Nazca Booby. The largest of the Galapagos boobies, Nazca boobies have orange beaks and grey feet rather than a bold blue or red hue like the others. 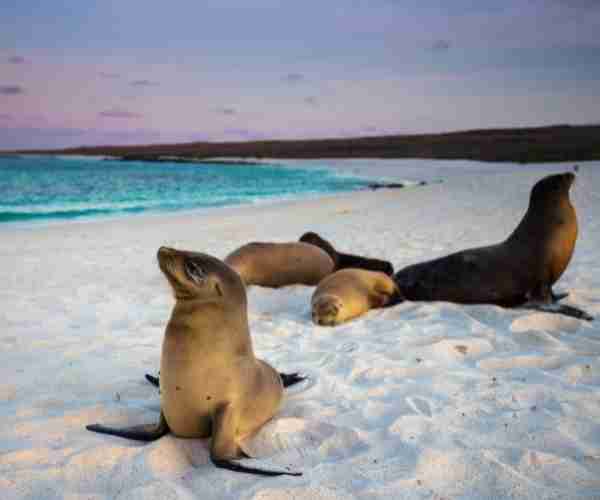 Flightless Cormorant. As the name belies, this bird is the only type of cormorant that cannot fly. It’s confined to the beaches and lava shoreline of Fernandina and Isabela islands.

American Flamingo. American flamingos breed in the Galapagos and Caribbean. They can be seen in brackish lagoons near beaches from March through July around the nesting period.

Frigatebird. Frigatebirds are best known for their famous courtship ritual which involves the males inflating their red chests to attract females. San Cristobal, North Seymour, and Genovesa are the top islands for spotting them.

Galapagos Hawk. Endemic to most of the Galapagos islands, the Galapagos is closely related to white-tailed and red-backed hawks in North America. Extremely rare, there are said to be just 150 breeding pairs that remain.

Santa Fe Land Iguana. Endemic to the island of Santa Fe, the Santa Fe iguana is similar to the land iguana, but has a more pale-yellow color and longer, more tapered snout. 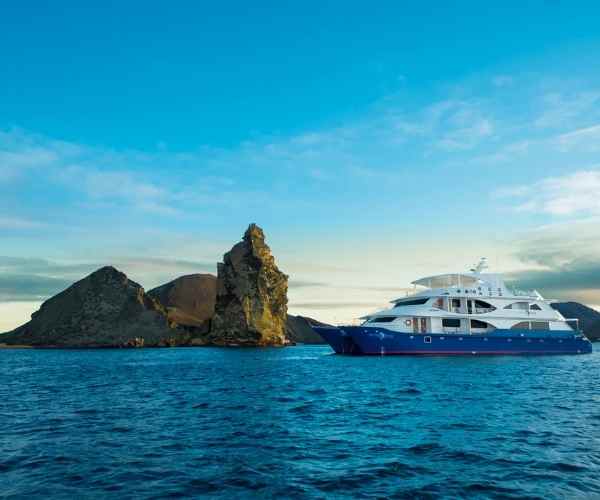 Marine Iguana. Found only in the Galapagos on the islands of Santa Cruz, Floreana, Fernandina, Isabela, and Española, this iguana is a gentle herbivore with a fierce look. It has spiky dorsal scales, a smashed-in face, salt-encrusted head, and wide-set eyes.

Galapagos Penguin. One of the world’s smallest penguin species, the Galapagos penguin lives and breeds here year-round, found mainly on Fernandina and Isabela, although they can be spotted on others, including Bartolome where people often swim with them around Pinnacle Rock.

Galapagos Sea Lion. These sea lions can be seen throughout the islands, swimming close to shore or lounging on the beaches.

Galapagos Giant Tortoise. One of the most famous animals in the islands, these are the largest living species of tortoise, with lifespans in the wild of more than 100 years in the wild. The largest populations can be found at Alcedo Volcano on Isabela and in the Santa Cruz highlands. 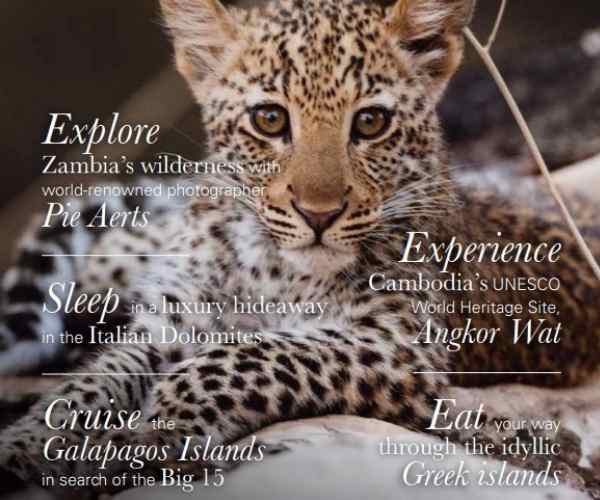 Read the full magazine of Issue 5

Read the full magazine (issue 5: Winter) to discover new and exciting destinations across the globe.