Sleep in the Serengeti's migration camps

Sleep in the Serengeti's migration camps

When it comes to safari experiences, witnessing the Great Migration is always high on the list, and rightly so. There is no sight quite like it. Around two million wildebeest and zebra: grazing, grunting, galloping. Not to mention their constant effort to stay safe, and stay alive. The wildebeest migration in East Africa is, without a doubt, one of the greatest spectacles on Earth.

So what’s so special about this migration?

It’s the largest of its kind. Around 1.5 million wildebeest, accompanied by 200,000 zebras take part in a pilgrimage that covers approximately 800 kilometers a year. Although it may seem chaotic, the migration herds know exactly where they are heading. They travel in a clockwise direction across the plains of the Serengeti National Park in Tanzania, and the Masai Mara National Reserve in Kenya. They make this huge journey every year, in constant search of fresh rains and green pasture. 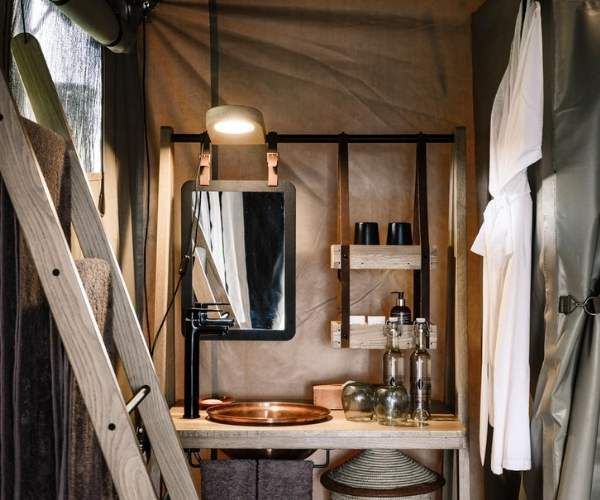 Wildebeest and zebra live and travel in harmony together because they are not competing for the same pasture. In fact, they eat different parts of the same grass and at the same time, protecting one another.

The Great Migration is the epitome of the survival of the fittest. Over 250,000 and 30,000 zebras die throughout the year – not only by predators like crocodiles and lions but more commonly because of exhaustion, thirst, and hunger. The weak are left behind.

Migration patterns differ slightly every year depending on the arrival of the rains and other weather conditions. That said, we have a relatively good idea of where the herds are at every month of the year. Their migration route is predictable and because of this, we can plan your safari around the herds to give you the best opportunities to see the Great Migration. 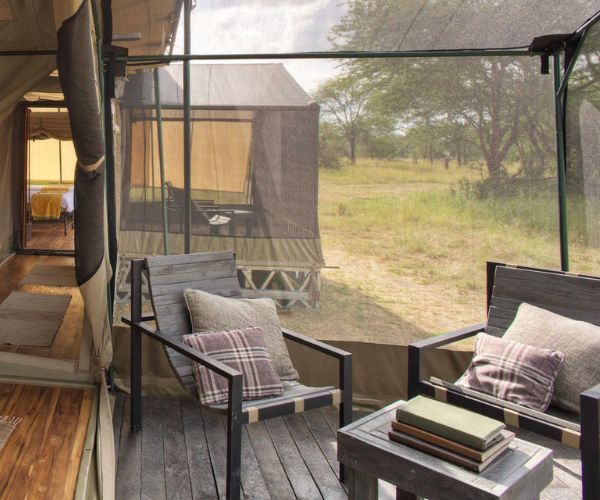 Although the migration is a never-ending pilgrimage, this period is often called the ‘start’ of the Great Migration. This is because it is the calving season for the wildebeest. Between January and March, over 8,000 wildebeests are born every day. By the end of March, although some are taken by predators like lion and hyena, around 1 million calves are born and ready to take on the challenge ahead.

This calving period takes place in the southern plains of the Serengeti National Park, in an area called Ndutu. This region is generally more open compared to denser forested areas in the Serengeti which is an advantage for the herds as there are less ‘hiding spots’ for predators in bushes or trees. Out in the open, the herds can spot nearby danger and send alarm signals to the rest of the herd. This will ultimately reduce the element of surprise and give the mother time to protect her calf.

That said, there are over 3,000 lions living in the Serengeti ecosystem and, although they tend to have their own territories, some pride will travel further to take down the newborn calves. In fact, all big cat sightings are common during this period in the Ndutu region. Leopards, lions, cheetah, wild dog, and hyena are the main predators to the herds. 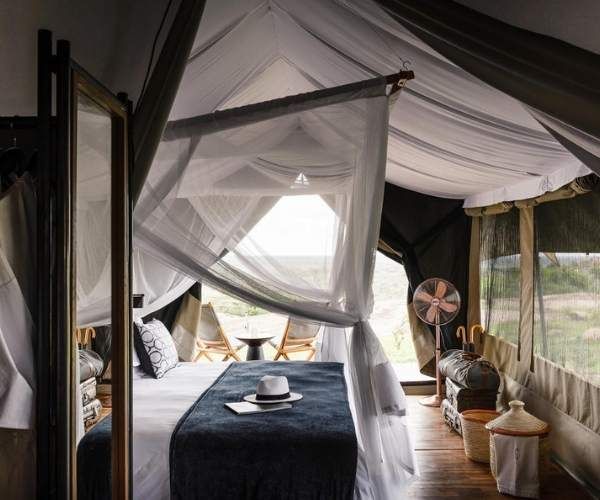 The migration herds have their calves before the rains arrive in April. The period between April and May is the rainy season in East Africa. Because of the heavy rains, most of the safari camps and lodges shut for a couple of months. This gives the guides some time off, as well as a chance for camps to do any maintenance work.

During this period, the wildebeest herds make their way from the southern plains up through the western plains of the Serengeti, heading north. There are thousands of calves now travelling with the herds, so their pace is very slow. They pass through the central Serengeti (Seronera region), and make their way into western corridor in June.

This Grumeti region is home to scattered woodlands and long-grass plains. This is a dangerous landscape for the herds and their calves, as predators lurk in the bushy vegetation. Furthermore, the herds cross the Grumeti river which have hundreds of deadly crocodiles lurking in the waters. By the middle of June, the herds are migrating into the northern plains of the Serengeti. 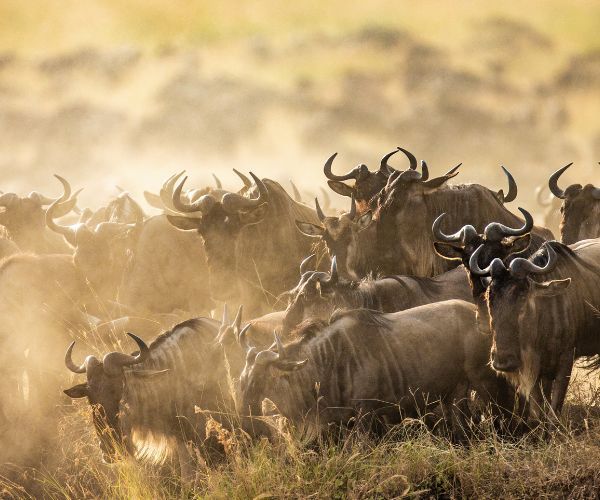 The period between July and October is often regarded as the most thrilling part of the Great Migration. The herds are now in the northern plains of the Serengeti National Park. This area is beautiful in every way. Compared to the central and southern plains of the Serengeti, the northern plains can only really be accessed via a light aircraft. This, along with the fact that there are much fewer camps in this region, means that tourist numbers are considerably lower than in other areas. The herds graze the plains around the Lamai Wedge in July until they are ready to make the monumental leap over the mini cliff edges of the Mara River. This is one of the most.

Although you can witness these river crossings from both the Tanzania (Serengeti) and the Kenyan side (Masai Mara), we’d recommend the Tanzania side. This is predominantly because there are much fewer tourists and vehicle numbers. There are 10 river crossing points on the Tanzanian side of the Mara River. Although your safari guide cannot predict which crossing they use, they will have been observing the herds every day so they will have a pretty good idea of their movements and predictions.

What to do in Tanzania 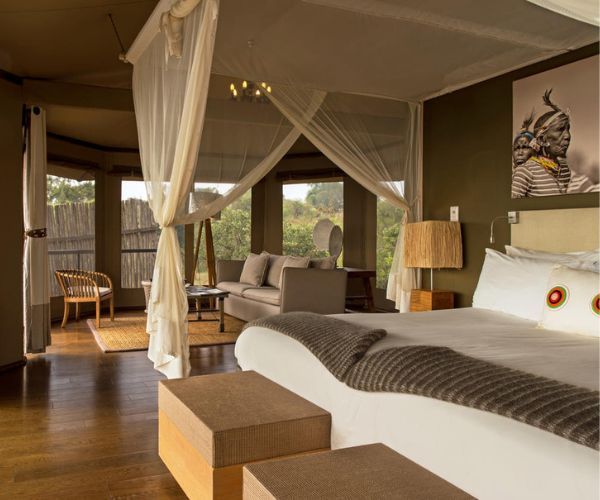 Once the herds are in Tanzania, they migrate through the eastern plains of the Serengeti National Park, passing through the Loliondo Region. As well as the migration herds and other resident wildlife, the eastern plans are particularly good for big cat sightings. The area around Namiri Plains was closed to the public for over 20 years to allow for the cheetah population to replenish. The project was certainly successful as today, the region is one of the best places for cheetah sightings, as well as great numbers of lion prides.

In December, the herds keep heading further south towards the Ndutu Region. The fresh grass coverage and the moist plains are very well received by the exhausted herds. In January, the calves start to drop and the annual pilgrimage starts all over again. 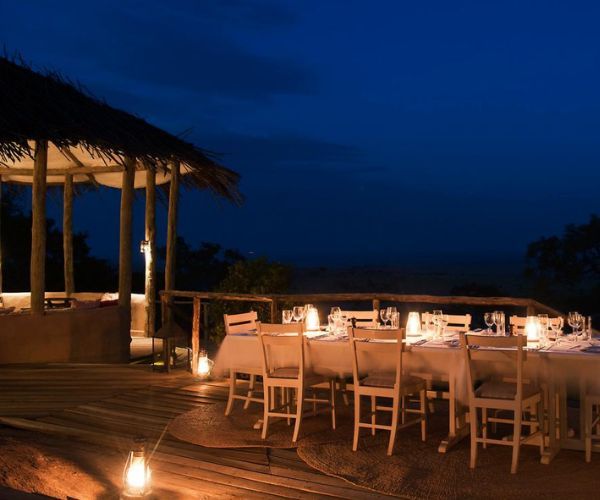 While the game viewing is certainly the highlight of your stay in the Serengeti, a huge part of the experience is the accommodation. One of our recommendations is to stay in a ‘migration camp’, which gives you the best opportunity to capture the herds. These have been around for a while but have become increasingly popular over the last few years.

A migration camp is one that relocates across the plains of the Serengeti, following the movement of the herds. Because of their temporary nature, these camps are usually canvassed and offer a simple and authentic bush experience. These canvassed tents are still very comfortable and often luxurious – with some offering outdoor showers and stargazing beds.

Get in touch to find out which accommodation we’d recommend for your Tanzania safari but, if you are looking for some safari camps to whet the appetite, we highly recommend Olakira Migration Camp, Namiri Plains, Lamai Serengeti, and Lemala Kuria Hills.

Where to stay in Tanzania